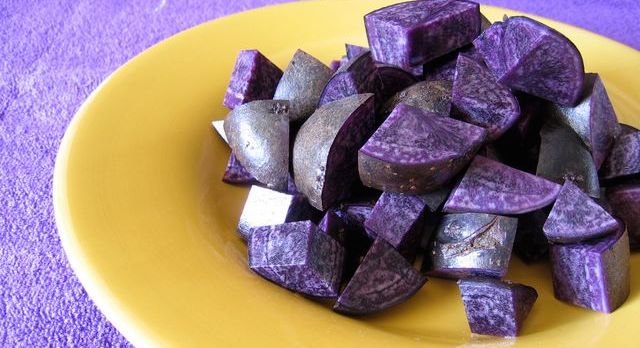 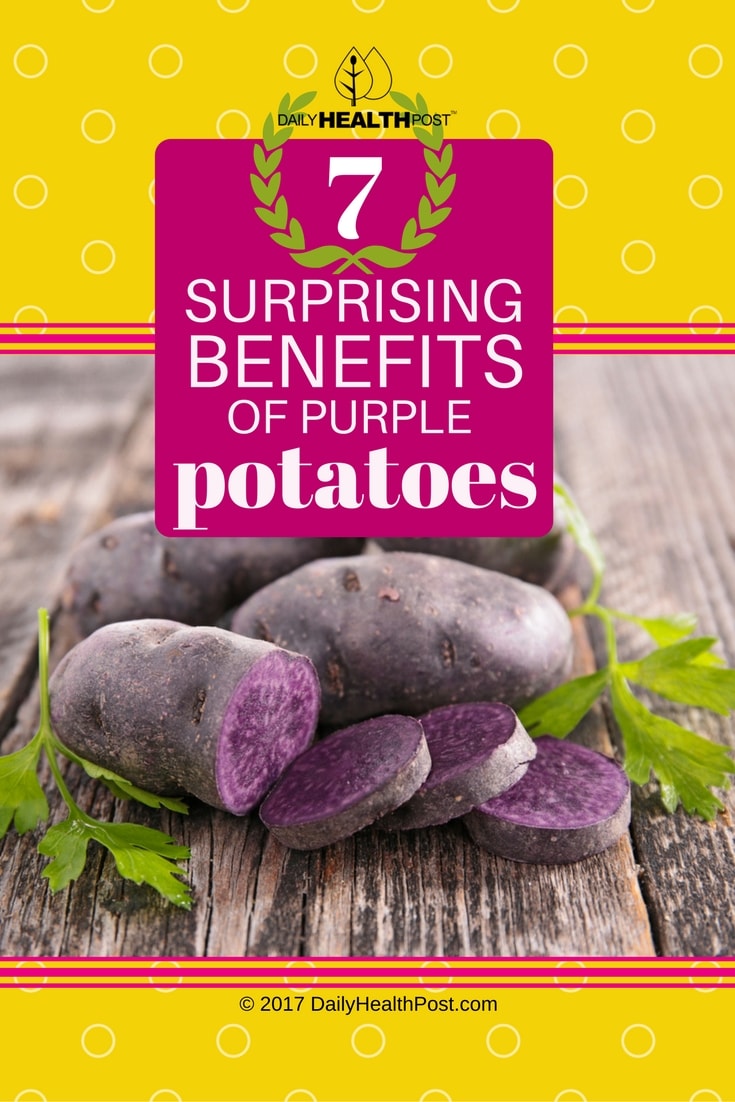 Most of us are used to seeing and eating the typical white or yellow fleshed potatoes.

You may even eat sweet potatoes on a regular basis and so you might be accustomed to orange as well.

Native to South America, purple potatoes got their name due to their deep purple skin and flesh. There are several types of the purple potato including the Purple Majesty, Purple Viking and Purple Peruvian varieties.

The rule of thumb with fruits and vegetables is that the deeper and richer the color, the more nutritious the content tends to be. The purple potato is no exception to this rule. It is rich in the antioxidant that is characteristic of deeply colored blue or purple produce called anthocyanin.

This compound is from the powerful flavonoid family of antioxidants and is found in other nutritional powerhouse foods such as blueberries and pomegranates. It is most well-known for its immunity boosting and cancer fighting properties.

Further, this deeply pigmented antioxidant has shown great promise in protecting the integrity and structure of DNA and encouraging the production of cytokines which are vital to proper immune response.

It also shows impressive anti-inflammatory properties, helps to protect the health and integrity of the capillaries and strengthen membranes, and may have a role in regulating estrogenic activity which can help lower risk of hormone-related disease.

A small study that was presented at the American Chemical Society National Meeting in Denver in 2012 found that eating these potatoes lowered the blood pressure of the subjects who consumed them compared to non-consumers.

This is likely due to their therapeutic effect on the capillaries and blood vessels as mentioned earlier and the purple potato’s high concentration of another phytochemical called chlorogenic acid which has been linked to lower blood pressure in mice.

Potatoes are typically associated with weight gain and by some as a “forbidden food” due to their high starch content. So for many it was a surprising outcome that consuming six to eight small purple potatoes per day not only lowered the blood pressure of the participants but also caused no weight gain at all.

Eating purple potatoes can have a positive effect on your brain.

In one trial involving rats, researchers found that anthocyanins from purple potatoes had a protective effect on brain activity. Anthocyanins helped the brain recover after a stroke by increasing certain proteins that repair damaged brain tissue.

No matter how you eat it, purple potatoes will improve your digestion.

A 2016 study found that the anthocyanins found in purple potatoes can help improve your gut’s microbiota by increasing the number of beneficial probiotics that aid digestion. Researchers found that purple potatoes had prebiotic characteristics which act as “food” for probiotics (healthy gut bacteria).

Gout is caused initially by a condition called hyperuricemia, which is basically an excess of uric acid in the blood. Uric acid is produced in the body during the breakdown of purines – chemical compounds that are found in high amounts in foods such as meat, poultry, and seafood.

Compounds in purple potatoes have a beneficial effect on your liver.

According to the journal Food and Chemical Toxicology, extracts from purple potato helped to reduce tissue scarring on the liver and lower liver inflammation.

One laboratory trial found that the anthocyanins from purple potatoes can help prevent colorectal cancer by killing off malignant cells. In addition, anthocyanin fractions have also been found to help prevent cells from mutating and turning cancerous.

Related: 24 Cancer-Fighting Foods You Should be Eating