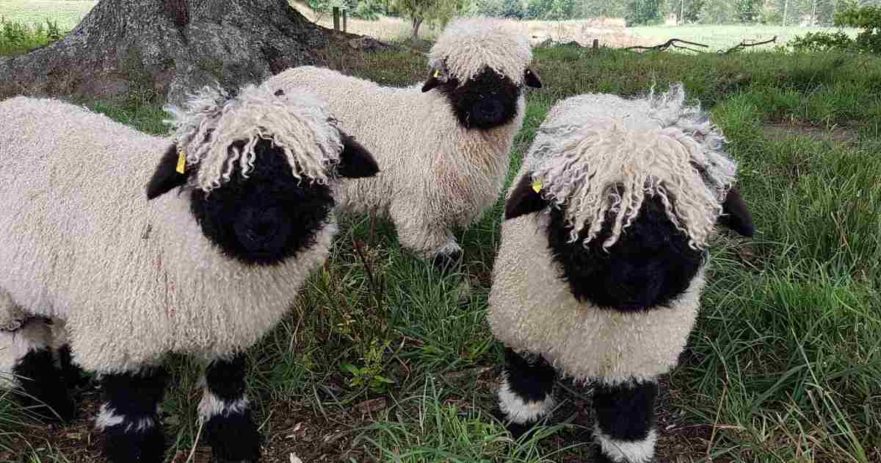 The Valais Blacknose, hailing from the Swiss Valais region, is a rare breed with spiral horns, black faces, and gorgeous shaggy coats. Interestingly, they weren’t established as a separate breed until 1962 albeit being documented as early as the 1400s.

They have black patches on their feet, hocks, and knees. Their thick, fluffy white fur coats keep them warm in severe weather conditions typical of Swiss winters.

A Winning Combination of Personality and Appearance

Today, the Valais Blacknose is just as well-known for its docile personality as for its adorable appearance. These sheep are in very high demand. Their calm nature and friendly disposition make them great pets.

Their white curls set their unique black faces off. The spiral horns, which both males and females have, are yet another distinctive feature. These sheep are bred for both wool and meat. You can derive almost 9 pounds of wool per sheep a year. Typically, their wool is used for felt and carpets because of how coarse it is.

Taking the World Over

The Blacknose was previously confined to Switzerland for centuries, but people have started importing them into other countries in recent years. They are currently found across the UK after their import into the country began in 2014. In Australia, New Zealand, and the United States, breeding programs have been launched with the hope of initiating import of the highly popular breed.

Some issues can be expected in the US as the USDA prohibits the import of European sheep embryos or live sheep. To get a pure breed eventually, crossbreeding will be necessary.