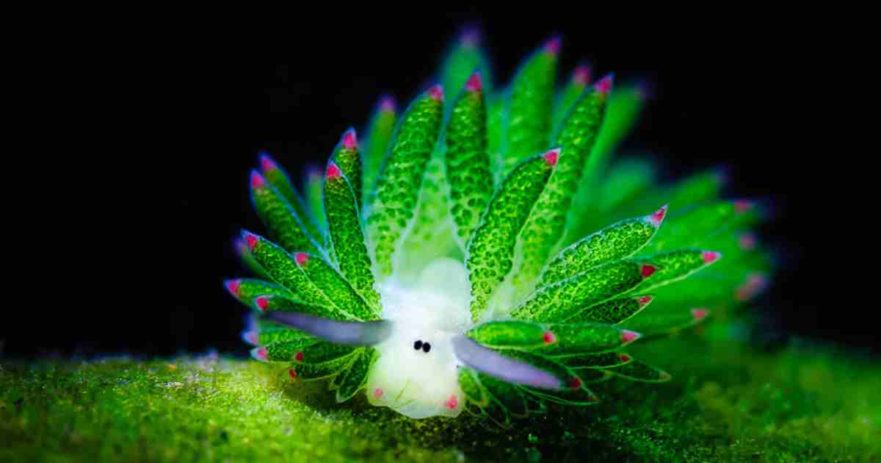 We’ve all heard of the “sun diet” at one point or another. Also called “Breatharian-ism” or “Pranic Nourishment,” the idea behind this ridiculous diet is to survive without food or water by solely relying on “prana” or our vital force and sunlight. Naturally, it goes without saying that this concept is 100% scientifically incorrect and even dangerous. While humans can’t just live off sunlight, a fascinating and lesser-known species of sea slugs called Costasiella kuroshimae or “leaf sheep” can.

Just like most plants and algae, these sea slugs are capable of not only absorbing sunlight and getting vitamin D from it but can actually sustain themselves with sunlight.

How is that possible?

If the leaf sheep are really slugs, don’t they eat plants? Well, they cheat, of course! If your first instinct was that it’s impossible for a slug to photosynthesize and that’s something only plants can do, you’re correct. However, the leaf sheep has found a way to cheat the system we call “life” by utilizing a process called “kleptoplasty”.

Kleptoplasty is a unique behavior or process which includes taking “chloroplasts” from food sources and incorporating them into your own cells and organisms directly rather than digesting them. And what are chloroplasts? Well, that’s easy:

Chloroplasts are the organelles used by plants and algae to conduct photosynthesis by using chlorophyll. And, for the final piece of the puzzle – what do the leaf sheep sea slugs eat? Algae, of course!

So, the whole process becomes clear:

The leaf sheep in action

If you’re wondering whether it’s boring to just stand and photosynthesize for most of your day, then yes – that does sound boring. However, the leaf sheep keeps busy too as they need to eat algae from time to time to keep their supply of chloroplasts up. If you want to see them walking about looking for algae, check out this YouTube clip.

Looking at the Costasiella kuroshimae their “leaf sheep” nickname becomes very understandable – with their “faces” comprising of just two black eyes, a flat mouth, and two cute “horns”, they do look like a sheep-like caricature. And literally every other part of them looks like a leaf.

Can we see the leaf sheep in person?

These tiny sea slugs are hard to spot underwater but what makes them even harder to find for most people is that they’re only found in the waters around Japan. If you don’t have the time or means to make it to the land of the rising sun, another option you can explore is the U.S. east coast where the Eastern Emerald Elysia sea slugs live.

This species of sea slugs aren’t nearly as cute as the leaf sheep (which is why they didn’t go viral) but the Eastern Emerald Elysia utilize the exact same process – they eat algae, they “kleptoplast” its chloroplasts, and they then use those chloroplasts to photosynthesize sunlight for a while.