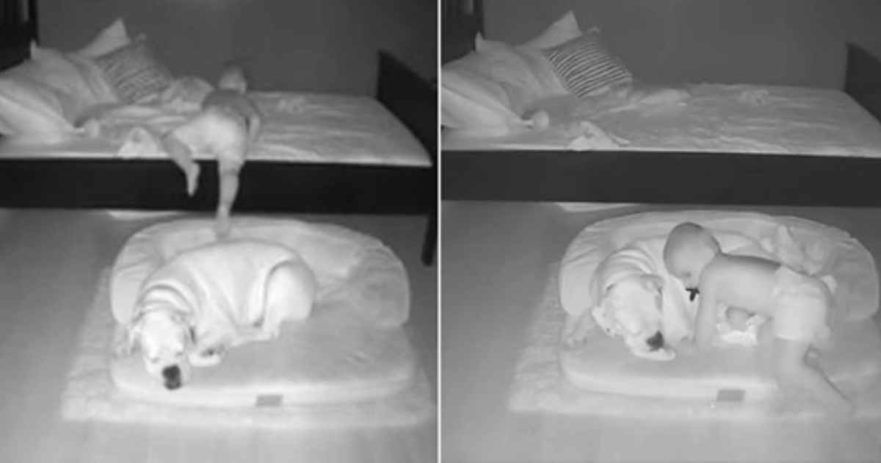 Few things are as adorable as the unquestionable love between a child and a pet. The recent story of Paige Knudtson, her son Finn and their dog Brutus showcased that beautifully.

When Paige Knudston found out she was pregnant with Finn she decided to adopt a loving and caring dog so that her son could have some company growing up. Paige was well aware of the many benefits pets like dogs offer to young children and she had grown up with boxers herself. So, the decision was easy to make and the family adopted the 2-year-old boxer Brutus before the baby was even born.

“Brutus is just a big teddy bear,” Knudtson shared. “He loves attention and loves to snuggle with people.”

It wasn’t all smooth sailing from there, however, as there were complications with Paige’s pregnancy. When she was 20 weeks in, an anomaly scan showed that baby Finn had a heart defect. This necessitated multiple procedures after the child’s birth as well as an open heart surgery later on.

“We were extremely lucky to have found this out prior to his birth, or he would not be here with us today,” Knudtson said.

It took seven weeks and several more complications after the boy’s birth but the family was finally free to go back home. That’s when baby Finn and his adopted brother Brutus finally met. The connection was instant.

“Once we got home, it was as if Brutus just knew Finn needed some extra close monitoring, and he has been by his side ever since,” Knudtson said.

The two of them started doing everything together even before Finn could really walk or crawl. They’d play outside together, eat and sleep together, watch TV or play with toys, and more.

“Brutus often curls up wherever Finn is sitting and follows him from room to room in our house,” Knudtson said. “If Finn is sick, Brutus knows it and just stays right by Finn’s side or lays his head on Finn’s chest.”

Most of this was initiated by Brutus, of course, as Finn was too small to do much more than just cry at first. When the two were separated even for a little bit, however, the boxer would immediately start looking for the child, scratching at the door separating them, and whine. When Finn was still sleeping in his crib, the dog would often have to settle for sleeping next to the crib but, whenever possible, he’d cuddle with Finn instead. And when Finn got big enough to sleep in his own bed – things got even funnier.

“Finn just started sleeping in his ‘big boy bed’ a little over a month ago and that is when Brutus began crawling up and sleeping in Finn’s bed every night,” Knudtson said. “It was as if he laid next to him to prevent him from rolling out of bed.”

It isn’t just the dog jumping in the child’s bed, however – turns out it’s often the other way around. As the dog was already used to sleeping on the floor next to the child’s crib he’d often still just lay in his own dog bed. It was Finn who quickly stopped being satisfied with sleeping so “far” from the pooch.

“Finn then began climbing out of his bed and sleeping on his floor, so naturally Brutus began sleeping next to him there as well,” Knudtson said.

The whole situation is so adorable that Paige Knudtson eventually decided to put a nanny cam in the duo’s bedroom and capture their nightly escapades. The video the cam captured was even more adorable than we anticipated.

“Finn sleeps with Brutus all night, every night,” Knudtson said. “Whether it’s in the dog bed, Finn’s bed or the floor — the two always sleep together.”

Hopefully, Finn will continue growing as healthy as possible and enjoy Brutus’ faithful and loving company for as long as possible.

Adorable moment toddler curls up next to 'best friend' boxer dog
Share
Tweet
Advertisement
Next »
Latest Headlines » Wellness » Camera Captures Adorable Moment Toddler Sneaks Out of Bed To Sleep With His Dog
Advertisement
Advertisement
We use cookies on our website to give you the most relevant experience by remembering your preferences and repeat visits. By clicking “Accept”, you consent to the use of ALL the cookies.
Do not sell my personal information.
Cookie settingsACCEPT
Privacy & Cookies Policy