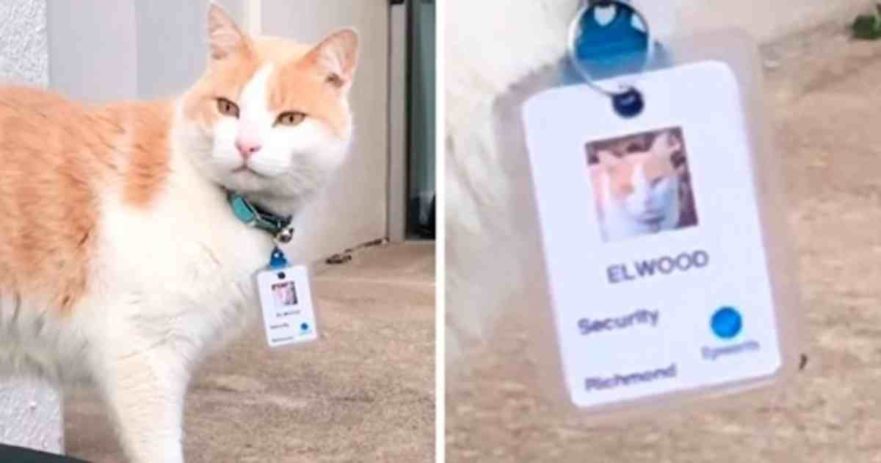 Having friendly coworkers can make your job more pleasant. But what if your coworker wasn’t human, but a cat? Apparently, cat employees are now a thing at the Epworth Hospital in Richmond, Australia.

Meet Elwood, the now security guard at Epworth who makes sure law and order is present within hospital grounds. It all started when colleague Chantel Trollip shared photos of Elwood and talked about him online. Chantel is a Pathologist at the Epworth Hospital and noticed Elwood hanging in front of the hospital every day about a year ago. The cat would seem very “chill” there, usually alternating between shady and sun-lit spots and he didn’t mind people’s attention at all. On the contrary, Elwood loved getting pets from strangers.

Elwood didn’t have a collar the first several times Chantel noticed him and he seemed like a stray, even though his fur was in a generally good condition. Later, however, she noticed that he had not only acquired a collar from somewhere but even had an Epworth Hospital ID badge on.

“I first noticed his ID badge on him in June. I was actually having a case of the sads that day, but seeing his ID badge turned my whole mood around!” explained Chantel. “When I first saw him, he wasn’t wearing anything, so I assumed he was a stray. Then someone put a collar and tag on him and now most recently he’s got his own ID badge, which is identical to our actual staff badges down to the call codes on the back.”

“He is lovely and friendly, but not overly affectionate. He enjoys a good pat, but likes to keep things short and move around a fair bit. He is on the security team, after all, has to make sure everyone coming and going gets checked,” explained Chantel.

Is Elwood doing a “good security job”? Probably not, especially if an emergency happens. But he seems really good at uplifting people’s moods by giving them the privilege to pet his fluffy orange-white fur. Although, Chantel believes it’s possible that Elwood is deterring crime through his cuteness alone.

“I think any potential criminals are thwarted by his sweetness when passersby see him! He has a very sweet chirp of a meow and I think anyone with any ill will would automatically change their plans upon hearing it and so I assume this is his way of getting the job done.”

And, as a slight twist in the story, it eventually turned out that Elwood isn’t a stray and lives across the road with a nice family and his twin cat Jake. He just comes out to “work” every day.

“He’s never really tried to get into the hospital, I think he’s too small to activate the automatic doors anyway,” elaborated Chantel. “There is a kidney dish from the hospital that someone has turned into a water bowl for him.”

And while we hate to end this on a bit more serious note, it should be noted that cat owners in Australia are advised to not let their cats wander outside of their owners’ properties in Australia. In fact, that’s expected to be codified into law soon. The idea behind this expected ban is to protect the native wildlife in Australia to which cats present a major problem.

Still, we’d like to think that Elwood is not a part of this dark statistic. After all, if he’s busy at work all day, he probably doesn’t have time to hunt birds. And that badge with a bell on it probably hinders his hunting success quite a bit too while simultaneously boosting up his style points.