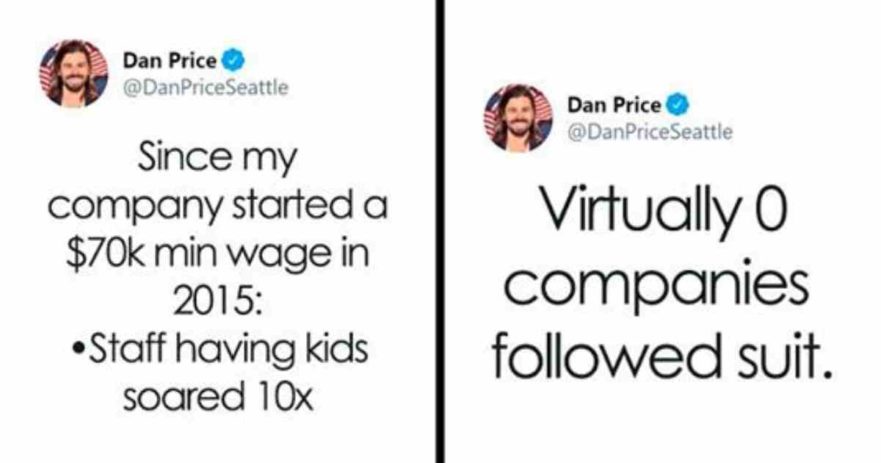 They say money can’t buy happiness. And while money certainly isn’t everything, it can take a load off your shoulders when you have enough of it. That’s what Dan Price realized while hiking with his co-worker Valerie in the Cascade mountains that tower over Seattle. As they walked, Valerie told Dan that she was having financial difficulties. Her landlord had increased her monthly rent by $200 and that made it harder for her to pay her bills. Dan didn’t like this one bit. After all, Valerie had served for 11 years in the military, doing two tours in Iraq, and was now working 50 hours a week in two jobs.

“She is somebody for whom service, honor and hard work just defines who she is as a person,” he told BBC. Even though Valerie was earning around $40,000 a year, in Seattle that wasn’t nearly enough to live comfortably.

At 31, Dan was a self-made millionaire. His company, Gravity Payments, which he set up in his teens, had about 2,000 customers and an estimated worth of millions of dollars. Though he was earning $1.1m a year, Valerie made Dan realize that a lot of his staff might be struggling – and he decided to change that.

While doing some research, Dan stumbled upon a study by the Nobel prize-winning economists Daniel Kahneman and Angus Deaton, saying that additional income can make a significant difference in a person’s emotional well-being.

After crunching the numbers, he gathered his 120 employees and announced that he would be raising the minimum salary $70,000. To make it happen, Dan had to not only slash his $1 million dollar salary by 90%,, but also mortgage his two houses and give up his stocks and savings.

Many praised his decision, but it also had its fair share of doubters and haters. Fortunately, things turned out better than anticipated and here’s what he had to say:

“People are starving or being laid off or being taken advantage of, so that somebody can have a penthouse at the top of a tower in New York with gold chairs,” Dan said. “We’re glorifying greed all the time as a society, in our culture. And, you know, the Forbes list is the worst example – ‘Bill Gates has passed Jeff Bezos as the richest man.’ Who cares!?”

The hypothesis is that when employees don’t have to worry about making ends meet, they’re able to be more focused on their jobs, and happier because they work for a company that recognizes their value. And it’s working.

The results of his decision made Dan not only richer but also very happy. “What I got back in return was better than anything I could have ever imagined, and was truly exciting and shocking in some ways,” he told Forbes. “What I got back in return is, we went from instead of having zero first-time homeowners per year, now we have many first-time homeowners here at Gravity, and that is so exciting to me.”

Secondly, the rate for things like retirement, for people at Gravity, has also skyrocketed. But the absolute best thing for the CEO that came out of the increased wage has been hearing about how his employees went from nearly zero first-time parents to about 20 babies born to families each year.

“I can’t think of anything better that I could get in return out of it than that, and that’s the impact. That’s the legacy. Because, those babies, they carry with them almost infinite potential, solving some of the existential crises of humanity, curing cancer, solving things like global warming. You name it. Who knows what those babies are going to do, and probably I won’t be around to find out all the cascading effects that will come from that.”

His tweets sparked a discussion on the way companies treat their employees: