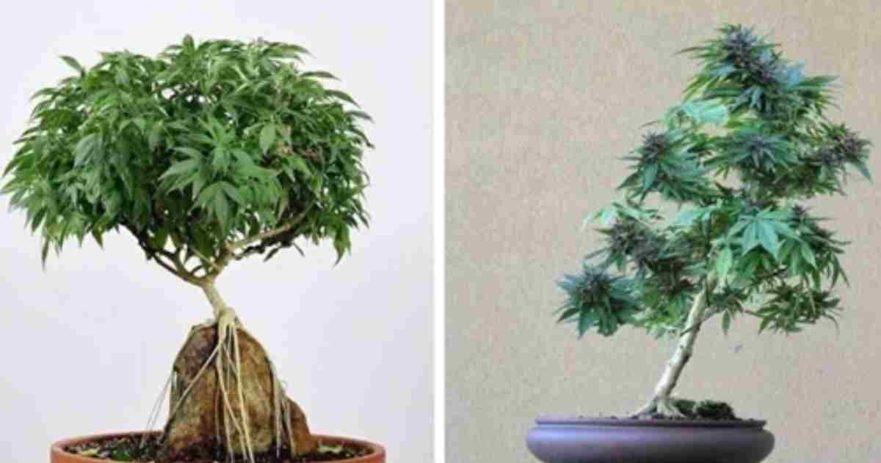 Marijuana has been one of the most discussed plants in the U.S. for decades and will likely continue to be so for much more time to come. Even just its current legal status is complicated enough to leave legal experts and legal hemp growers confused. Amid all the contradicting information, it can seem silly to consider “marijuana bonsai” as an adequate choice for indoor potted greenery, right? Well, depending on where you live, it might actually be both a legal and fun option.

Where is it legal to grow marijuana at home?

Technically speaking, growing marijuana at home is still prohibited by the federal government. Such a federal prohibition would typically apply across all states, however, that’s not exactly the case.

A passage in a 2018 Farm bill made hemp-derived CBD (cannabidiol) federally legal. As far as growing whole marijuana plants, however – those were made legal only in certain states and under varying conditions while still technically being “illegal” everywhere on a federal level.

What does this mean? It means that – hypothetically speaking – the federal government can bust you up for a single marijuana plant always and anywhere, even if you live in a state where growing marijuana for recreational use is allowed. In practice, however, you can be 99.99% sure that won’t happen if you’re in a state where recreational marijuana has been legalized as the federal government doesn’t care what individual citizens are doing in the privacy of their own homes.

So, where is it legal to home grow recreational marijuana? This simple map shows pretty clearly that the U.S. states can be divided into four distinct groups depending on how legal/illegal it is to grow marijuana there.

So, if you do live in any of the 17 states from the first three groups, there’s nothing stopping you from growing a bit of marijuana at home (if your state is one of the eight states from the third category you’ll still need proof of a medical reason for the marijuana).

Now, if you want to not only grow a couple of pots for fun but want to go big with a whole garage or basement of marijuana growths under artificial light – we can’t help you with that. There are plenty of excellent sites and guides for professional or semi-professional marijuana growth out there that can offer you excellent advice on the lighting, soil, and techniques for maximizing marijuana growth.

Instead, what we thought we’d bring to your attention is a fun alternative anyone (from the legally-allowed states) can try at home – marijuana bonsai trees!

What are bonsai trees and how can marijuana be grown that way?

Many people are under the false idea that bonsai is a type of plant – that’s not the case. Instead, bonsai is a way to grow trees and bushes that’s been popular in East Asia for millennia but has started getting popular around the world in recent decades.

The word “bonsai” comes from Japanese where it means “tree in a tray” or “planted in a container”. Essentially, bonsai is a technique for growing typically larger trees, bushes, and other plants in smaller sizes. The purpose of it? Usually just fun – if you live in an apartment or you don’t have much or any outdoor space, why not grow a small tree indoors as you would a flower?

What makes bonsai trees unique is that they are grown to develop into healthy, mature, and authentic “adult” trees but simply remain kept in a miniature state. Bonsai trees have branches, produce leaves, and even fruits, they are just small and decorative.

So, how does this work for marijuana? Isn’t marijuana typically rather small anyway?

Yes and no. Marijuana comes in several different types or sub-species and they can vary quite a lot of in their size and growth patterns. The most popular types of marijuana are Sativas, Indicas, and Ruderails with dozens of hybrids produced from them.

Sativas marijuana can grow surprisingly tall – up to 20 feet under the right conditions indoors and even more if you just leave it outdoors.

Indicas and Ruderails marijuana plants, on the other hand, are shorter and bushier – they usually grow between 3 and 6 feet and height and tend to grow a bit more sideways.

Hybrids from these three main strains can vary greatly.

Even if you’ve got an Indicas or a Ruderails marijuana strain, however, 6 feet can be a bit too much if you want a more decorative marijuana plant that you only occasionally use for consumption. That’s where bonsai marijuana growth comes in.

How to grow a marijuana bonsai tree?

Regardless of which marijuana strain you’ve got, there are several main steps for a successful bonsai growth:

Depending on what you want from your bonsai marijuana plant, you’ll want to prune it in different ways. Here’s a nice guide from the marijuana-growing experts from Royal Queen Seeds.

Why would you want to grow a marijuana bonsai tree?

There are a couple of main reasons why you’d want to grow a marijuana bonsai tree in your home: