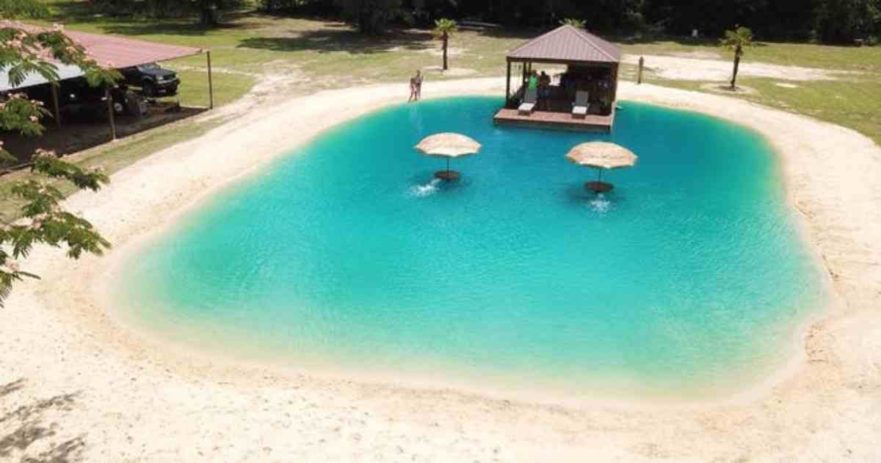 Every now and then, we are inspired by the story of a self-made and highly successful entrepreneur. This time it’s 33-year-old Eric White. His company Zydeco Construction, based in Louisiana, specializes in constructing crystal clear swimming ponds surrounded by sand, much like a beach. Clients can have their beach customized with umbrellas, outdoor kitchens, volleyball nets, and gazebos.

Never go to the Beach Again

This way, you’ll never need to go to the beach again, which you have to share with hundreds of other people sometimes. You have your own, in your very own backyard!

Does anything limit the size of your “home beach”? Only your imagination, says White – apart from tangible things like money and land.

A Dream Come True for Everyone

“It has always been a dream of mine to do these different things,” White said. “I like to stay in the market for things that most companies don’t offer, especially custom requests.”

White’s company also offers outdoor kitchens and in-ground trampolines. In line with his motto in life – making things happen – he can come up with a creative way to master any challenge. He also specializes in building embankments for homes with flooded or water-logged backyards and other drainage solutions. His unique and effective drainage solutions will never impact your neighbors adversely.

White has loved construction ever since he was a little boy. His aptitude for it probably predates his knowledge of the concept. He struggled a lot as a teen and was even homeless for about eight months when he was 15, after dropping out of school. He shares that he could barely read and spell his name at that time.

He always loved building, though, and was very motivated to become successful at it. To get his life back on track, he began helping at a local construction firm. The struggle was very real; he even had a family at that time. Later, he did a stint as a mechanic for Ford, but it wasn’t his thing.

The big break came when he learned a construction company in Baton Rouge was hiring and paying quite well for those years – $12 an hour. He shares he was lucky enough to start under an understanding boss who taught him all about the business and took him under his wing. White’s leadership skills emerged early on. In fact, he had been promoted to team manager within the first six months.

Not long after that, it was time for his creativity to shine. He launched Zydeco Construction to keep himself “busy” and realize some of his inspired visions.

POND Trade magazine reports that contractors in states across the US specialize in natural swimming pools and swimming ponds. In that sense, White has had a chance to learn from the best. Companies nationwide are offering backyard beaches and realizing their visions. It is White’s creative flair that makes his products stand out. Zydeco Construction can build a super-bouncy trampoline on ground level among other backyard amusements.

White does every pond differently. His approach to addressing challenges is also exceptional. The main problem with swimming ponds according to industry experts is ensuring filtration, pumps, or lights won’t lead to danger of shock. Another issue involves the propensity of harmful bacteria to multiply in these types of water bodies.

It is precisely those issues that motivated White to become who he is today. He made it his mission in life to resolve them and transform each and every pond created by him into a “paradise.” He conducted extensive, in-depth research and applied what he learned to pond design and construction. Among his achievements is designing a swim pond specialty pump, for which he acquired a patent.

Your Own Beach: Fun and Affordable

Finally, the answer to everyone’s question: how much would having your own beach cost? Surprisingly, it’s quite affordable – about $20,000 according to White. Each pond takes time to build because it is customized based on the client’s preferences and the specifics of the location. The result is most certainly worth waiting for.