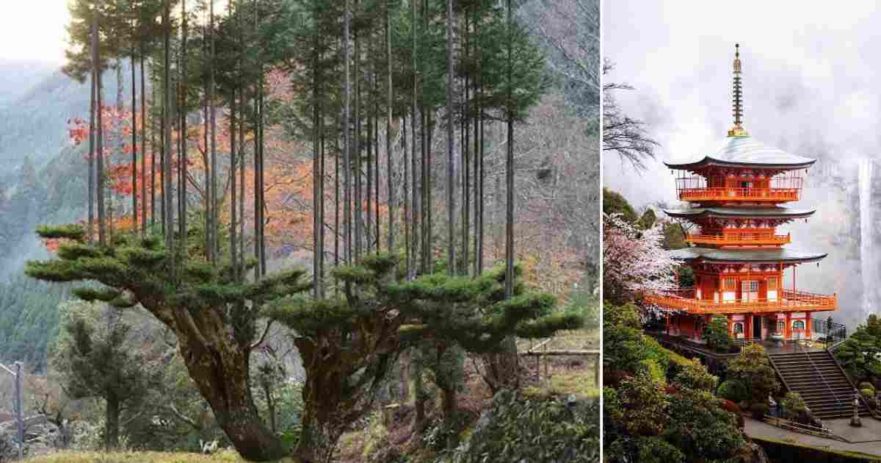 Most of us have heard about bonsai trees but there’s another ancient Japanese forestry technique that’s arguably more fascinating, beautiful, and even useful than bonsai and that’s daisugi.

Daisugi works on a similar principle to bonsai in that it involves heavy pruning of trees to “guide” their growth. But while in bonsai that’s used to keep trees in a miniature size so they can be grown indoors as large flowers, the goal of daisugi is very different.

With daisugi, the forester or arborists will prune the tree – traditionally Japanese cedar trees – so heavily from a certain point, that instead of growing multiple branches in every direction it only grows a single or a few tall branches going straight up.

The tree is first grown to its large “adult” size, of course, and it’s allowed multiple branches in its lower half. However, going upward, it’s pruned so that only 100% vertical branches are grown. The end result looks both amusing and captivating and daisugi is a treasured part of Japanese arboriculture.

Why is daisugi done, what is its benefit?

Originally, the daisugi technique was developed around the 14th century in feudal Japan. It was done because the island country had a much higher demand for high-quality lumber but not many wide forest regions. Japan’s several islands are mostly full of high mountains so it couldn’t supply the lumber its people required.

Daisugi fixed that problem by allowing the Japanese people to get quality lumber without chopping off their forests. Because with this technique you get lots of very tall, very straight, and very thick branches, the Japanese people were able to just chop the tall branches off the top of the trees as if they were tree trunks, and the trees underneath them would continue to grow.

This means that a single tree could give large, thick, and quality lumber every ~20 years while the tree itself would survive for centuries and won’t need to be replanted.

What’s even better is that the lumber from daisugi trees was 140% more flexible and 200% stronger and denser than regular cedars thanks to all the pruning. If this sounds counter-intuitive, let us explain:

By pruning the other branches of the tree the foresters don’t just “clear” room for a large single branch – they also allow the tree’s internal nutrients that would otherwise be enough for dozens of branches to all be used on a single “super branch”. Essentially, they’d trick the tree to “overfeed” a single branch, making it grow much thicker, stronger, taller, and straighter.

An added benefit of all this is that the branch would be mostly devoid of any “knots” that are typical for wild trees, meaning that daisugi lumber requires less processing.

And, as Japanese culture has long favored wooden architecture over stone one because of the volatile climate in the region, daisugi lumber became a staple in Japanese architecture. From standard wooden roofs to the wooden beams in the famous tea rooms in Kyoto, daisugi cedar lumber was a highly valuable commodity in Japan for centuries.

Is daisugi still as widely used?

The demand for lumber dropped off in Japan in the 16th century but daisugi trees were already popular enough for arborists to keep pruning Japanese cedars in this manner. Ornamental outdoor gardens with daisugi trees also remained very popular for centuries and are why we can see daisugi trees even today.

In the wild, former daisugi cedars that have been allowed to grow unpruned have also created some very fascinating forests. The forests that cover Kyoto’s northern hillscape, for example, are especially gorgeous.

Is daisugi a viable forestry technique for lumber today or does it have a strictly ornamental purpose?

Today, in Japan and elsewhere around the world, daisugi is only used for ornamental gardens. However, it is a viable question as to whether it can be used for lumber today and more and more people are making that argument.

While worldwide we have plenty of flat lands that are suitable for forestry, we also have disastrous deforestation problems. And since maintaining wide and healthy forest areas around the world is crucial for maintaining a healthy climate, daisugi might be the answer climate experts have been looking for.

The problem, however, is obvious – the lumber industry is highly conservative and doesn’t accept change very well. And switching from the current model of cutting everything down and replanting forests only occasionally when the government makes them to daisugi will be difficult for the lumber industry.

Here are the basic pros and cons of adopting daisugi as a mass forestry technique.