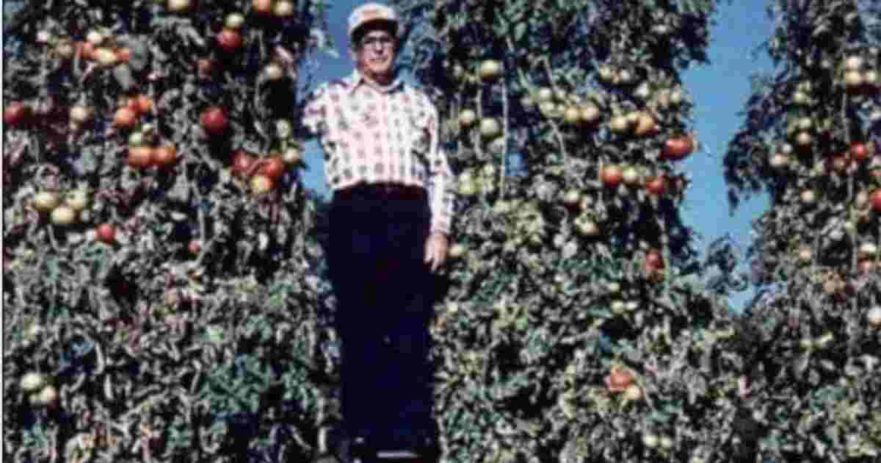 More and more people are looking into switching to a rural lifestyle. Being more self-sufficient has its benefits. But even those sticking to the suburbs, can still get a taste of a more self-sufficient lifestyle with a nice veggie garden in their backyard. And if you’ve never tried gardening before, don’t worry – below we’ve compiled a list of tips from a former gardening world record holder that will help you grow tomatoes as tall as a 3-story building!

Charles Wilbur from Alabama is a certified tomato expert. Back in 1985, he got into the Guinness Book of World Records with his 28-foot-tall giant tomato plants carrying ~400 pounds of tomatoes each. He achieved that with no GMOs and no chemical use – just smart gardening. His record stood until 1999 with the current world record being an amazing 65 feet but Wilbur’s dethroning doesn’t make him any less of an expert. In fact, he’s the author of the book How to Grow World Record Tomatoes which has a lot of useful insight into his process and gardening techniques.

We’re definitely recommending giving the whole book a try but in the meantime, if you’re looking for some starter tips, here are the 5 main things Wilbur recommends:

1. Pinch the plant’s suckers off

A plant’s suckers are the little outgrowths that split off of the plant’s stem. They usually start growing between the stem and the leaf. While they are a natural part of the plant that helps it expand, they’re not helpful if you’re growing tomatoes under controlled conditions and want to maximize their height and productiveness because the suckers themselves require energy.

“Suckers, if allowed to grow, become full-fledged stems, which in turn will send off more suckers, forking again and again,” Wilber says in his book. “If these suckers are pinched off, the stem can be trained to grow straight up the cage.”

Wilber recommends pinching the suckers before they’ve managed to grow to more than 1.5 inches, preferably even sooner than that. This does mean that you’ll need to inspect your plants regularly but that’s a part of gardening. As for the pinching itself, Wilber says that using your fingers or tweezers is better for the plant than cutting the suckers off with scissors as cuts are harder to heal. He also mentions that gardeners should be careful not to pinch off the fruit clusters while removing the suckers.

2. Get some tall cages

As a crawling plant, tomatoes grow as much as they can for as long as they can. If you keep good care of them and supply them with adequate water and nutrients (more on that below) they will grow as much as the space around them allows for. So, prepping some tall cages for your tomatoes to grow onto is a smart idea.

“The plant can climb to the top of the cage and then spill over and come back down, or a second cage can be set atop the first,” Wilber says.

As for the cage itself, that part is up to you – it should be as tall as you want your tomatoes to get, and as practical for your garden and for your preferences. Wilber does recommend using a soft, 3-ply string to tie the tomatoes to the cage, however, as that makes it easier to pick up the fruits later.

Any gardener knows how harmful weeds can be but they also know that herbicides ain’t fun either. The best alternative to herbicide is ground cover and Wilber recommends using that to protect your tomatoes.

From his experience, using tightly packed bales of hay work very well. They’re not too appealing to the eyes, however, so another option is planting non-invasive perennial plants around the tomatoes to protect them. Clovers are a good example, Wilber says.

This sounds like a no brainer but it’s something a lot of people get wrong. Wilber recommends using pond water over the treated and chlorinated tap water most people use. He remarks that just like our health depends on the quality of the water we drink, the same goes for tomatoes and other plants. If pond water is not an option, installing a nice water filtration system is a good idea.

As for the watering process itself, Wilber points out that you’d want to cover a wide circumference around your plants and not just water directly on them. That’s because tomatoes’ roots expand horizontally for many feet so you want to water their entire root network evenly.

5. Use the right compost

Of course, the “food” of your plants is just as important as their water. Wilber uses what he calls a “super compost” – a mixture of weeds, grass, hay, fresh manure, and kitchen scraps. He packs the mixture in an air-tight container to preserve its nitrogen – a process called “anaerobic composting” which preserves ~90% of the nitrogen in the compost. He then keeps the sealed compost in a sunny spot, preferably somewhere it can reach 160 Fo so that any weed seed and diseases in the compost can be killed off.

As for applying the compost, the general principle is “little but often”. Ideally, the compost should make up ~30% of the tomato soil at any given time. You should add new compost and soil to your tomatoes at least once every two weeks or even once every week if possible.