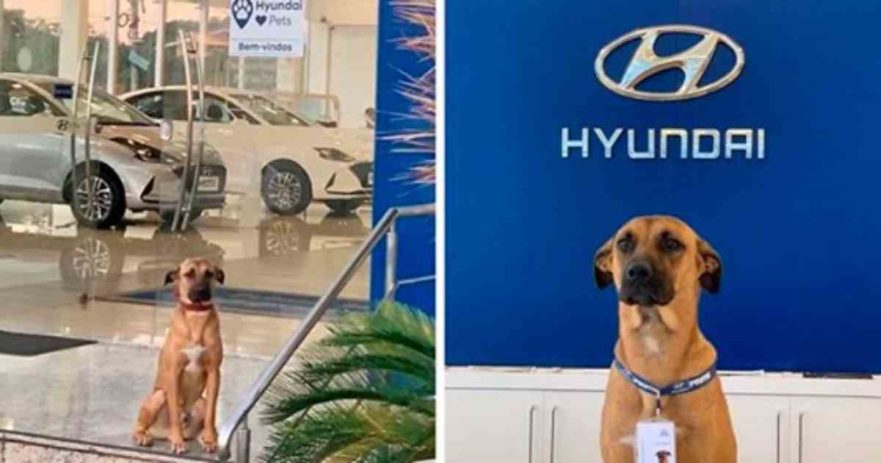 Finding a job is never easy but a dog in Brazil just showed us how sometimes the key is to just be persistent. Instead of settling for the back of a restaurant or a small alley with some trash cans, this cute pooch chose a Hyundai dealership as his dream home. And the way he ensured he’d get his new home was by going to the dealership every day and be as adorable as possible until they eventually adopt him.

The folks at the dealership didn’t just adopt him, however – they named him Tucson Prime, and hired him to work with them as a sales consultant. Even though Tucson can’t really “consult” the dealership’s customers, the management there still recognized his talents of predisposing the clients and increasing the likelihood of a successful sale.

So, in addition to giving him a home, a job, and even an ID badge, they even made the lucky doggo his own Instagram account. The ‘pawfessional consultant’ photos that Hyundai Brazil has been posting of Tucson recently quickly took over the internet.

Is it just a publicity stunt?

It always could be, you never really know. However, by the looks of it, the dealership just wanted to give the dog refuge at first. In their own words, it was Tucson’s ability to greet the customers, interact with them, and raise their mood, which made the dealership “offer” him a promotion.

The showroom’s manager Emerson Mariano told Top Motors Brazil that the dog has had a tremendous impact on the whole environment in the dealership. He credits that to Tucson being more than an ordinary dog and impressing everyone with his “very caring and docile nature”. Tucson Prime’s effect on the store and its customers is so significant that Mariano even said many customers were returning to the dealership just to pet and play with Tucson from time to time.

Why did the dog keep going to them?

It’s unclear why Tucson chose that exact building to hide from the rain and seek attention. Car dealerships tend to be rather big and flashy buildings so they do attract attention. Plus, there are always people there and that’s likely all the pooch cared about.

The night Mariano decided to take in the dog was particularly rainy, and he felt sorry for the stray. So he offered him temporary shelter, water, and food. Later on, Mariano would reach out to the dealership’s board and arranged for Tucson to be officially adopted and appointed the duties of the store’s mascot and ‘pawfessional consultant’.

“After all, the company has always been pet friendly, so now, we decided to embrace this idea in practice too, having our own pet precisely at a more complicated time like this with so many abandoned animals,” the manager said.

Of course, they also took the dog to the vet and made sure that he’s as healthy as possible before “employing” him into their service.

As for Tucson’s professional future – the sky is the limit! It’s expected that he’ll also star in Hyundai’s national advertisement campaign too, however, so there might be even more promotions in his near future.